In the late 1950s, Grand Banks Yachts launched their first 42-foot hull from a nondescript yard in Junk Bay, Hong Kong. The most prolific of these designs, the Classic, featured separate aft and forward trunk cabins and has become an icon for coastal cruisers. With distinctive workboat lines penned by esteemed naval architect Ken Smith, the Classic was an economic cruiser as sturdy and handsome as she was practical, safe, comfortable and affordable.

Before the company stopped the line in 2006, Grand Banks delivered more than 1,500 of these hulls worldwide. With many of the Hong Kong–built woodies (built between 1958 and 1973) still cruising today and impeccably maintained, it’s not hyperbole to say that the future of coastal power cruising changed forever with the introduction of this boat.

Though Splinters had been languishing in a California marina for a few too many years, suffering from rot and other problems compounded by neglect, Eric and Kim could envision her someday joining the ranks of those impeccably maintained Grand Banks Classics. They pulled the trigger and trucked the boat to their home, 1,000 miles away in Loveland, Colorado. 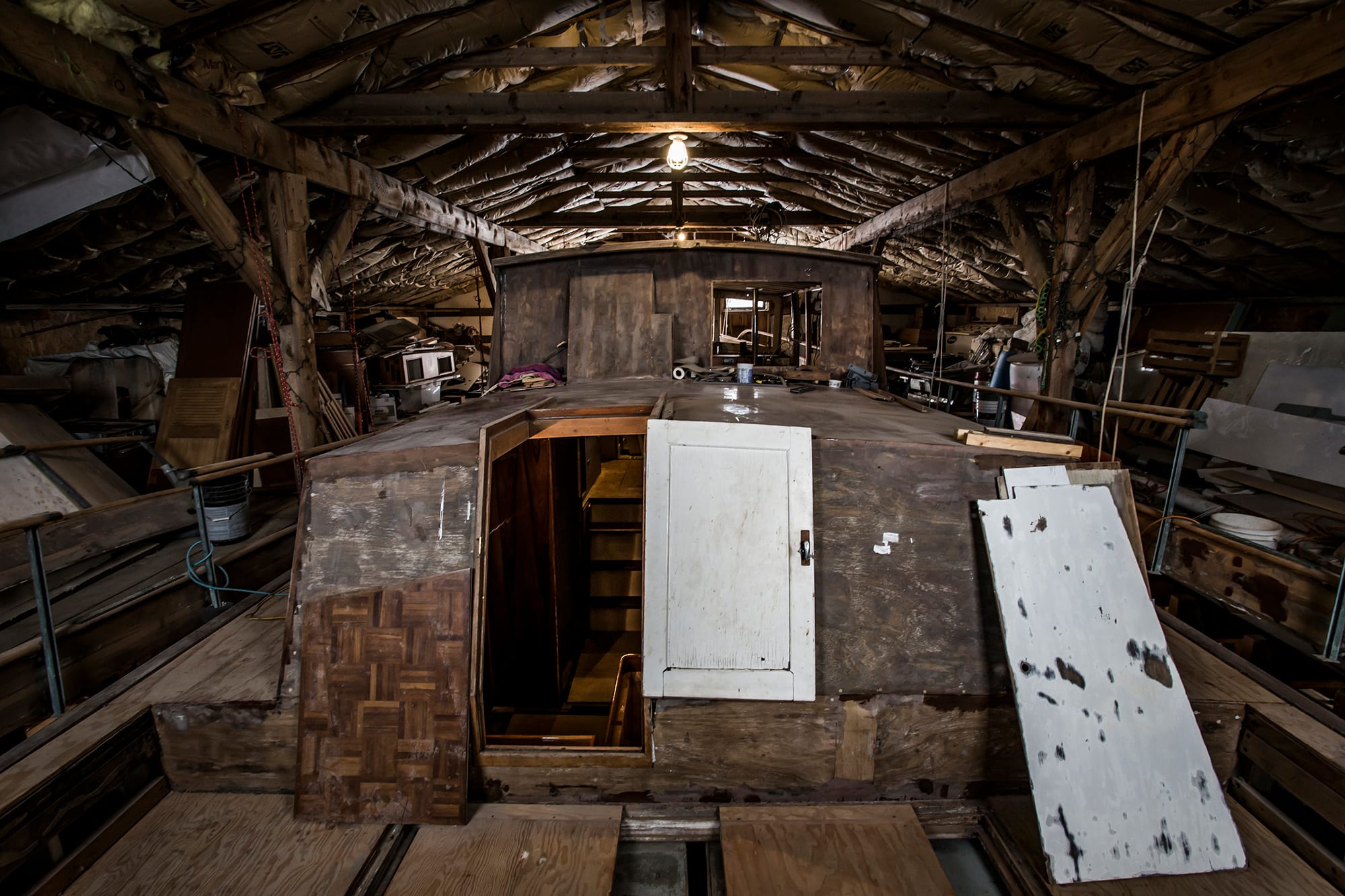 A bare minimum was necessary to get Splinters seaworthy again. Eric started by stripping the hull, recaulking and splining the planks, sanding, epoxy coating, and rebuilding the house and decks that had been devastated by rot. Eric took on all the work, but he had a family, too, so the project proceeded in fits and starts. Splinters became the talk of the small town. One neighbor memorably referred to the project as “Noah’s Ark,” and our previous story on Eric’s restoration was titled “Noah’s Work” (Passagemaker, May/June 2016).

On one hand, I couldn’t believe all the work that Eric had done himself in seven years. On the other hand, I could see where his friends, family and neighbors were coming from. Despite his optimism and positive attitude—and the staggering amount of work he had already accomplished—it was hard to imagine this project coming to a conclusion. He still had so far to go.

Over the next three years I received periodic messages from Eric with photos showing his progress, but it wasn’t until Kim’s work moved her to San Diego did the light at the end of the tunnel start to shine like a beacon of hope. The pending move was all the motivation Eric needed to push forward and finish what he had started so long ago.

Eleven years and a couple of months since the boat was first trucked to Colorado, Eric and I are discussing his—as well as the boat’s—journey, as she now sits in a San Diego slip. Eric sports a bronze California tan and the thrashed and bandaged fingers to prove that his work, like that of any boat-owning do-it-yourselfer, amounts to a never-ending list of tasks. He looks relaxed, though, and when asked, almost seems surprised by his own feat.

“I don’t think it’s quite settled in,” he says. I ask Eric what his high and low points were. He pauses to think. Then with a smirk, he says, “Obviously, launching the boat was a high point.”

“But before that,” he continues, ”I think that when the furniture was finally taking shape inside the boat it started to feel like more of a finishing project than a construction project.”

As for a low point, Eric describes heading down to the barn in freezing temperatures, with two pairs of gloves on, endlessly sanding, scraping, sawing. Though I never sensed that he despaired in the work, the progress was slow, and that in itself can encourage the onset of doubt. But here, as we sit in the salon as the boat jostles lightly in her slip, those faint doubts are just memories and all that is left is a custom piece of art, gleaming under fresh coats of varnish.

“I think I might be a little surprised at myself…that I stuck with it as well as I did,” he admits.

The Paulsens decided to leave many of the traditional Grand Banks touches intact, including the classic helm wheel, teak cabinetry and the parquet cabin sole (which Eric has on his list to refinish). But there are also personal touches throughout. Eric fashioned galley and head countertops plus a stunning leafed salon table out of live-edge Western maple planks that he acquired from a Pacific Northwest sawmill. Eric and Kim had mutual disdain for the standard L-shaped galley, so they decided to sacrifice some storage by cutting the return off to open up the space in the salon. Instead of a chair in the aft port corner, Eric built a high bench that houses a freezer so that guests have a reading nook high enough to see out the windows.

For other personal touches, Kim discovered that a hoop from a whiskey barrel made the perfect frame for a mirror in the master head. They also stain-tested a number of light-colored fabrics determining the right shade to complement the dark interior wood. The only other significant alterations they made were adding flybridge and salon furniture built-ins, as well as changing the master cabin to reorient the berth athwartships.

Eric is humble and self-effacing; he doesn’t blog or boast. But he deserves to be fiercely proud. He recognizes, however, that without Kim’s support this project would have been impossible to finish, especially while maintaining a marriage. The two are now living aboard, and while Eric irons out the wrinkles—a sticky hanging locker door here, a fuel filter problem there—they look to the now-attainable future of being able to cruise to Catalina and the Channel Islands, or ultimately even to Alaska.

But for now, there is still some work to do. Those fingers won’t have a chance to heal just yet.