This 2014 Grand Banks 43 Europa trawler for sale, "Gratitude", has been meticulously maintained since new. Her electronics equipment is above and beyond the typical packages and includes a FLIR Camera. She is a turnkey fast trawler ready for her new owner. With precision joystick control, top speeds over 25 knots and solid fuel economy for displacement-speed cruising, this 43 Europa offers great space, performance and more on-the-water enjoyment than any other yacht in her class. You will not be disappointed in this pristine example of the Grand Bank’s quality, fit, and finish.

Upgrades abound in this beautiful boat, including: Skyhook, upgraded generator and air conditioning systems, davit, phantom screen doors, teak cockpit, additional Pompanette flybridge seat, washer/dryer combo, more refrigeration and freezer space, along with a varnished teak transom, new Stamoid bimini & tender cover and much more. Her electronics were upgraded above and beyond factory specs, offering a truly unique and rare Grand Banks that's been maintained to a high standard and seen light use.

This dealership showcases up to 50 boats in and out of the water at our St. Petersburg marina location. Galati Yacht Sales of Tampa, FL specializes in luxury yacht and boat brands such as Maritimo, Princess, Cruisers, Viking, and Prestige Yachts. You can find anything from new to pre-owned boats and yachts for sale. 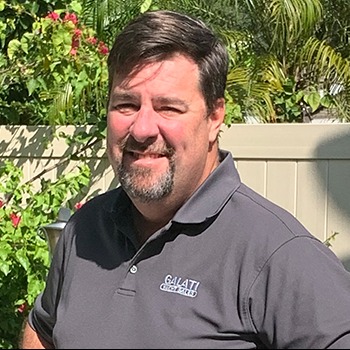 Raised in St. Petersburg, FL, Frank has been on the water since childhood. Frank began racing at the St. Petersburg Yacht Club's Optimist Dingy program. By age 15, he had competed at a world-class level on 4 continents.

After graduating from the Optimist, Frank immediately began campaigning in the Laser class. He qualified for the U.S. Youth Sailing Championships every year he was eligible and in 1985 won the privilege of representing the USA at the World Youth Sailing Championships in St. Moritz, Switzerland. He also qualified for the Laser Open World’s twice while still a “Junior”.

It was during this time that Frank began his “Big Boat” Ocean racing career. After 3 SORC’s in his home town of St. Petersburg, he landed a position on the 85’ Maxi-Yacht Ondine VII. At 18, Frank was the youngest sail trimmer ever in the class. He lived aboard Ondine for two seasons taking him from his home in St. Pete to Newport, Azores, Antibes, Palma de Majorca, Ibiza, Porto Cervo, Monaco, St. Tropez, and virtually every port city on the Medi­terranean from Gibraltar to Venice.

From the late 1980s through the mid-2000s, Frank was involved with several world-class campaigns and was crew on numerous national, continental, and world championship-winning teams.

Part of his experience with these programs led him to become a partner in Ultimate Yacht Management out of Chicago in the early 1990s. Frank learned all aspects of yacht construction, project management and of course maintenance. He also was involved with the development of the state of the art electronics systems on these boats.

Frank's love for sailing and boats was inherited to him from his parents, Joe & Kaye. They were early adopters of the “Live-Aboard” extended cruising lifestyle. In 1985, they sold their home and bought a 56’ fiberglass ketch “Navi-Gator" and began what would become a 26 year-long adventure. These adventures took them from Annapolis, MD down the east coast, through the Caribbean, and ultimately down to the South Pacific. They spent 10 years in the Pacific visiting almost every major island chain from New Zealand to the Marshall Islands.

Frank was privileged to be able to accompany them on numerous trips to places along the way including many islands in the South Pacific.

Frank lives in the Tampa Bay area of Florida with his wife Janet and their 4 children.